After some seven years, I'm making the leap from Blogger + Blogspot to Markdown + Octopress + Github pages.

The content here will remain, but the new blog is continuing at  daily.monolith149.com.

The story of moving is here:  Leaping to a new Blogging Platform.
at 13:47
Labels: blog, blogging

Interfaces in Go make it hard to navigate code

Sami Badawi writes about how LISP, Prolog, and programming languages since then.

I learned something new about spiders.

The cat was chasing something around the living room floor that I expected was probably a spider.  When the chase finally took the kitty behind the armoire, my daughter took a picture of him back there with her phone.

As usual, it was a picture of a cat with eyes glowing brightly from the flash. 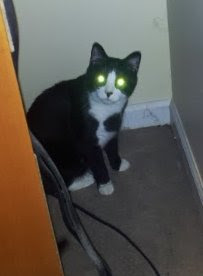 I remarked that it would be really funny if you could, in fact, see the spider's eyes glowing, too.

Looking at the picture, she replied, You can!

So there they were, a kitty and a spider, both with glowing eyes.  I had no idea that spider eyes did that!  (Or at least some part of a spider). 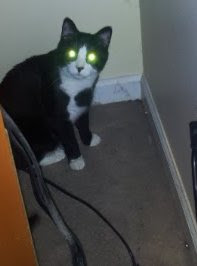 We could even stand there,  sight along our phone flashlights aimed directly at the spider and see the little reflections, very distinct and bright.  It looked like there were two of them even though I was pretty sure that arachnids have eight eyes. 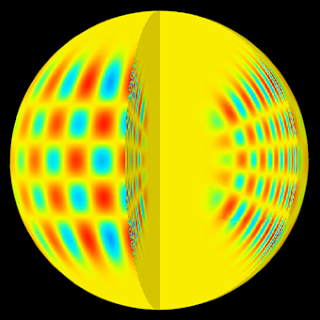 In light of the Kepler space observatory's malfunction, which may bring the mission to an early end, here's a nice overview of some of Kepler's contribution to stellar astrophysics from Sky and Telescope.

The Moon Over Andromeda 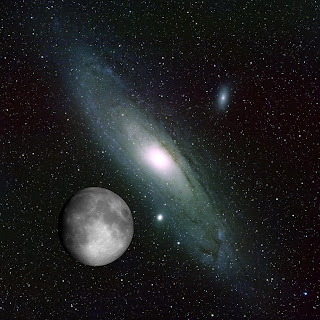 One of my favorite bits of information about the sky is how HUGE the Andromeda Galaxy (M31) is.  The thing about galaxies is that they are terribly dim.  Think about it.   We're inside the Milkly Way galaxy and yet, except for the nearby bright stars, we can barely see it unless we go to the darkest spot we can find.

Even when you do see M31 with the naked eye, which you can from a dark location, it doesn't look this big.  Objects have to be bright to look large.  In the same way, the Pleides is much larger than the moon, but they look tiny on the sky.

So long, Posterous.  I enjoyed using the service.
at 00:19
Labels: blogging, internet, web

Occasional reports on what in the world I'm doing. You can read here to find out what I've been working on and how it's going. There might be clues about what I'm thinking. New things learned will also appear.

How does one leave comments on this blog? See Comments.

News of This Blog

A new attempt at an old blog…again.